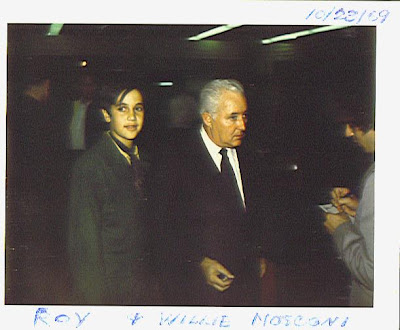 BCA Instructor Roy Pastor sends in this picture (at right) of himself, circa 1969, standing next to his then-idol, Willie Mosconi. I say "next to" and not "with" because the boy had to resort to subterfuge to have the picture taken with the great champion. Mosconi was a great player, but he could also be a tough and difficult man -- as Pastor's somewhat sad story about this photograph attests.

I've also attached a photograph below of Roy standing with Cueball Kelly and Onofrio Lauri. That picture also figures into Roy's story, which you can read in his note that I've attached below.

I grappled a little bit about posting this story -- after all Mosconi was one of the great icons of our game. But it's also an indisputable fact that there was a darker side to the man -- that much became clear to me as I wrote The Hustler & The Champ. It also seems clear to me that for our history to be legitimate, we must endeavor to capture and convey the full story of its icons, both the good and the bad.

"When I was 12 years old, back in 1969, my father took me to see an exhibition match between my idol Willie Mosconi and the house pro at Golden Q billiards in Queens New York. I was very excited as I watched Mosconi run 60 + balls to win the match.

We did not realize that Mosconi was selling copies of his book. When my dad asked him if he could take a picture of Mosconi with me, Mosconi replied that he would on the condition that my dad would purchase one of 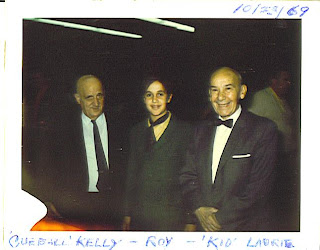 his books. Unfortunately, my father did not have enough money to buy a book. As a result, Mosconi refused to shake my hand or pose for a photograph with me. My disappointment must have been obvious because “Cue Ball” Kelly and “Kid” Laurie came right over, introduced themselves, posed for photos and were very kind. I think that it was Kelly who told me to go over and stand next to Mosconi while he was giving an interview. That way, even though he would not look at the camera, I had a picture with him.

I have kept the photos from that day as a reminder of my interactions with these legends of the sport. I always wondered how Mosconi could have so easily disappointed a 12-year-old star struck fan."