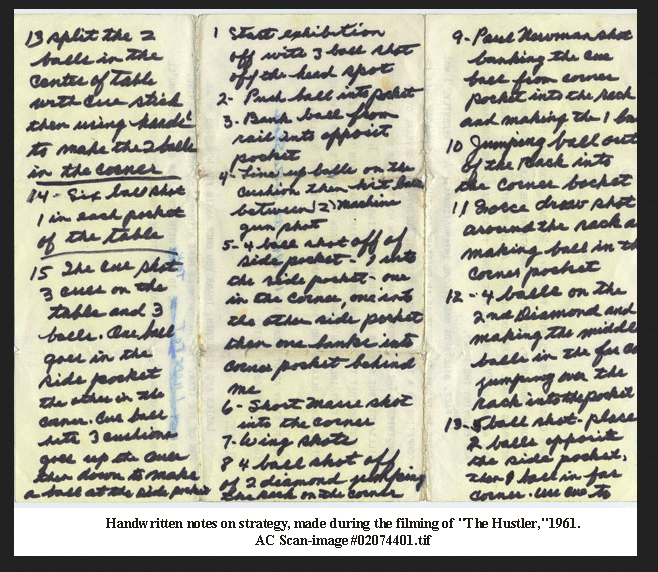 The National Museum of American History in Washington D.C. -- specifically its Archives Center -- has in its possession a great collection of artifacts relating to Willie Mosconi. Flora Mosconi, Willie's widow, donated the items to the prestigious museum in 2003. She also donated a cue stick, trophies, and an ivory cue ball to the Museum's Division of Cultural History.

The archival image above is of Willie tutoring Paul Newman and Jackie Gleason on the set of the The Hustler. Mosconi was the technical director for the film and had actually recommended Frank Sinatra for the Fast Eddy part. Instead director Robert Rossen went with Newman. You can read more about The Hustler, including eyewitness accounts from Willie's son, in The Hustler & The Champ.

I've also included at the right some handwritten notes crafted by Mosconi. According to information on the Archive's website, these notes relate to strategy while Willie was working on The Hustler. I'm not so sure. The folks in the Archives may have made this assumption, in that the notes make reference to the "

Paul Newman shot". However, it looks to me like these notes spell out Willie's exhibition trick shot routine, which doubtlessly also included the "Paul Newman shot." What do you think? You can click on the image at right to get a better view of the notes. Either way, I think they're particularly cool in that they apparently remained folded in Willie's wallet for quite some time. And by the way, you can check out the "Paul Newman shot" by clicking here.

The museum collection also includes identification and business cards, letters, and scrapbooks. Mosconi's professional and career papers housed at the center include those relating to his work on behalf of Brunswick, legal records, and affidavits attesting to straight pool records. The museum also possesses videos of Mosconi's appearance on the Ed Sullivan show. You can go to Archives Center website for more information about the collection and to read the rules for viewing the artifacts next time you're in Washington.

I was lucky enough to know Willie for many years and have played him in exhibition when I was living in Rochester NY. This could have been notes from the movie the Hustler but more than likely these are not.

Willie used these kind of notes at his exhibitions and somewhere in my memorabilia I have one of these from Willie. This was his way of framing his shots and allowing for a smooth exhibition. When my son was young I took him to one of Willie's exhibitions and I have a great photo of my son Jim with Willie under one arm and Willie's good friend Carmen Bassilio under the other. Carmen was a World Champion boxer, I said to my son that day that he was standing next to two legends in their respective fields.