Mosconi and Greenleaf -- TOGETHER

Will the wonders of the Internet never cease? I just came across this very cool footage of legends Willie Mosconi and Ralph Greenleaf sharing an exhibition stage.  (Click here to see it.) Willie appears to be at the peak of his abilities.  Greenleaf looks hung over. The footage, from a website called British Pathe, was shot during a performance for injured troops at Gardner General Hospital, in Chicago. I suspect this footage was taken in January 1944, as it was in that month that Mosconi and Greenleaf went on a four-city tour together. Two months later Mosconi would be inducted into the army. Six years later, Greenleaf would be dead. 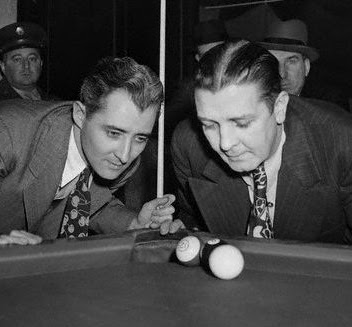 The two also reportedly joined together for a tour in 1934, shortly after Mosconi's debut in world competition.  Willie told biographer Stanley Cohen that Greenleaf was drunk for much of it. But even still, Greenleaf's staggering ability seemed undiminished. "I don't know how he did it," Willie said. "Even on long shots he seemed to be able to feel a ball right into the pocket, to shoot it just hard enough without banging away. It was like watching a virtuoso playing a violin, just beautiful."

You can also read about Greenleaf and Mosconi in The Hustler & The Champ.