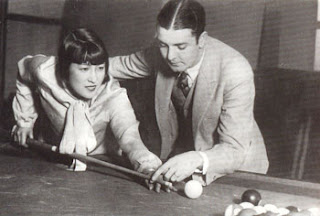 Here's a mystery. In 1934, shortly after Willie Mosconi and Ralph Greenleaf competed together in a national championship, the two icons supposedly went on the road together. Mosconi told stories about the road trip in his biography, written with Stanley Cohen. Both Mosconi and Greenleaf supposedly had been contracted by Brunswick Billiards to promote the sport during a series of exhibition matches.

Here's the mystery part: as far as I know, no one has ever produced any sort of independent confirmation of this long series of exhibition matches. I myself have gone through hundreds of articles in the New York Times, The Chicago Tribune and elsewhere, but have never come across a reference. I've asked a few other guys about this -- including pool historians Charles Ursitti and Mike Shamos -- and they agree that they've never come across any any sort of advertisement or news article to provide independent confirmation of the 1934 Greenleaf and Mosconi tour.

The problem may be that without a description of when and where these exhibition matches were played, it's hard to know in which newspapers to look, and in which editions. So I put it to the blogosphere: Has anyone out there hoarded an old article or advertisement from their hometown newspaper? Or how about this: Does anyone even KNOW anybody who's still alive who knew Ralph Greenleaf or his wife, the Princess Nai Tai Tai? I recently wrote about Harold Houle. But such folks are now tough to find.
Posted by R.A. Dyer at 7:24 AM