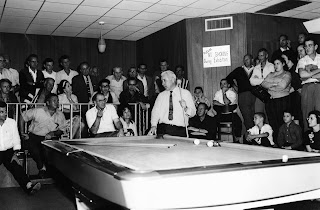 James Van Cise sends in this picture of a 40ish Willie Mosconi. He writes:
Here's a copy of an old family heirloom. That's my cousin with the
cigarette. We've always wanted to know what year and what possible
location this could have been. I am from Cleveland but my cousin
traveled a lot. Any ideas?

He also wrote:
I don't know who took the photo. ...
My own guess about the year is after 1962 but before 1972. I can only
go by the whiteness of Mosconi's hair. Post-Hustler movie demo?
An older pro here in Cleveland says he thinks it was taken in
Cleveland at a place called Le Cues which I'd not heard of."
Posted by R.A. Dyer at 1:40 PM