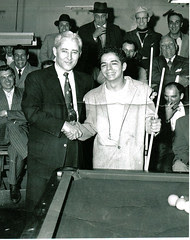 That's Willie on the left, and Norman "Jockey" Howard, at the right. The Jockey's son, Charles, sent in the photo. He said his dad was a full-time pool hustler.

"He never entered tournaments that generated national attention," said Charles, "(But) he was best man at Cornbread Red's wedding and has played with some of the greats such as Mosconi and Fats."